January 18, 2017
Anyone who has been around the sffchronicles.com for a while might have heard a little bit about one of the regular member's (@harebrain, on the forum, Bryan Wigmore when unmasked) book. Any of us who were lucky enough to read an early copy raved about it. So to see it published by Snowbooks is exciting.

One of the most interesting aspects of the book is the shamanic rituals, using animaths and I wanted to know how that came about and how it affected the writing of the book. I think it's a fascinating subject and one that merges well with fantasy.


Few will believe me, no doubt, when I say that my entire writing ‘career’ was orchestrated by Otter to get himself a bit-part in a book. But with hindsight, the evidence seems incontrovertible.

I never learned to swim as a kid, hating the chemical warfare zones that passed for municipal pools in those days. But I loved and was fascinated by wild water and the creatures that lived in it. In my early twenties, I spent vacations from my accountancy job doing volunteer work on far-flung nature reserves in the western and northern parts of Britain, and it was always the lakes and seething, frothing rivers I loved best about those places. On my last evening of a week at an RSPB reserve in the Inner Hebrides, someone came back from a walk and said he’d seen an otter in the tidal Loch Gruinart.

An otter! It seemed a near-mythical creature, so rarely were they observed. I yearned to see it myself. But the evening was getting dark, and I had to leave next morning after breakfast to make the ferry back from to the mainland. The only course was to get up in the grey dawn and go up the side of the loch to the ruined kirk the otter had been seen at, and wait, and hope, knowing the chance of it appearing there again was a hundred to one.

But as I’d found in many a RuneQuest games in my teens, when you really need that 0-1 dice-roll, up it comes. And after a few minutes, up the otter came, playing in a creek not fifty yards from me. (It now strikes me as a neat coincidence that I watched my first otter from the ruins of a church, though at the time I had no reason to attribute any spiritual quality to the animal.) When I got back to the accommodation bothy, another volunteer called Steve Berry said, ‘Well, we can all see from your face what you’ve been looking at.’ I was ecstatic.

Not long after, right out of the blue (it seemed) I began my first novel.

But it contained no otters, and thus did not serve Otter’s purpose and was doomed. Not that he bore a grudge for being left out of what he’d helped to inspire in the first place – when my hopes for the book crashed and burned, it was he who came to help, though I’d barely thought of otters since that time at the loch years before. In a slump of low spirits, I read a book by John Matthews of shamanic exercises: vivid and focused daydreaming intended to access the wisdom of the subconscious. Intrigued by the concept of power animals, I interviewed for the position of my own. I though a fox would be cool, but it bit me. The eagle was a similar non-starter, all talons and stand-offishness. Then Otter turned up and took the job. It seems strange now that I didn’t think of him straight away, but then again, success on the third try makes a better story than instant win.

After a wonderful week on Skye, watching coastal otters (and at one point standing under a freezing-cold waterfall) I began an MA in Creative Writing, and found the shamanic ‘journeys’ with Otter a great boost to my creativity. Thanks to some generous financial support, I was also able to work full-time volunteering at a place I’ve always loved and which had inspired my first novel, Kingley Vale nature reserve in Sussex. (Weirdly, my application had to be made to a Steve Berry, who turned out to be the same Steve Berry who’d volunteered with me at the time of my first otter sighting.) Kingley Vale isn’t a place you’d ever find an otter, the only open water being puddles after rain. But it turned out that the previous warden, a man whom the then-current warden and I met often on the reserve, was a son of Henry Williamson, who’d created the most famous otter ever: Tarka. With hindsight, Otter was there too even in that dry downland, nudging me on from the sidelines.

Just after that, I learned to swim. Previous attempts had failed because I’d never managed to relax enough in a medium that killed people, but suddenly it clicked, and I came to really enjoy going underwater and the play exercises our instructors gave us, retrieving things from the bottom of the pool and swimming otter-like through hoops. That led to a snorkelling holiday in Turkey, where I had the most amazing experience of swimming through a half-submerged Roman bathhouse, like in a safer, real-life version of Tomb Raider. And that led to my passion for freediving. The ingredients for The Goddess Project were starting to come together.

But there was one thing left. In my shamanic journeys in the Otherworld, Otter had always been silent: if I needed verbal advice, he took me to some other denizen. But one evening, as I was instant-messaging a friend in America, Otter intervened in the conversation, making rude comments and demanding fish. His voice came instantly, and when I started my next book, I knew I wanted him in it as the spirit guide of the main character — who would be a freediver, naturally. And from there everything spiralled, almost out-of-control at times.

Whether he really has been behind me since that first sighting, prodding me on, who knows. I don’t recall him being much help during the actual submission process, but he’d probably say him doing all the work wouldn’t have been good for me. And now that his glorious wisdom is in print, albeit taking up less of the book than he’d like, I expect he’s napping in the sun, daydreaming of the worshippers ‘his’ book will win him, who will bring him tributes of belly-rubs and buckets of fish-heads.

Not even Tarka got that.

The Goddess project can be found on: 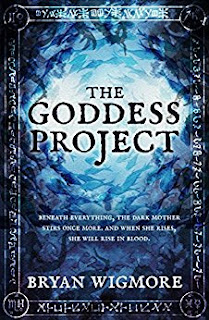