A Tale of Firsts

The fabulous Juliana Spink-Mills has her debut novel, Heart blade, coming out on 14th February this year from Woodbridge Press. I'm partway through it and it's a fantastic YA treat.

Anyhow, Ju came along to the blog to talk about the challenges of getting your writing - and yourself - out there, and how she's gone about squaring her shoulders and doing so.

I’m shy. Probably not that many people know this, because I’m great at faking it in public, but there it is. I’m a shy person. There are lots of us shy folks in this world, and writing probably sounds like a dream career for many of us. Work from the comfort of your own home! No need to interact with any co-workers! It’s just you, and the words on the page.

Except, it turns out that writing is less of a blanket-fort comfort zone, and more like jumping off a cliff. Headfirst. With a blindfold. Over and over and over again. Writing means taking risks. On-the-page risks, of course, as you challenge yourself to dig deeper and go further. But also other risks, less obvious to those who are just starting out at this game of words.

This is a tale of firsts.

Just after I started writing, I joined my first online forum. I posted my first tentative thoughts, terrified that someone would call me out, say ‘you’re not a real writer, you have no place expressing opinions.’ No one did. They were kind, and thoughtful, and interested. I made online friends, and began pushing against those self-imposed comfort zone boundaries.

Before long, I found myself sharing work for the first time, receiving critiques and feedback. This was a huge deal, and it was a true leap of faith. Not so much faith in others, but in myself: that I was ready to show my work, and ready to listen – really listen – to honest reactions.

Other firsts followed: first full beta read of a finished novel. First time querying an agent. First time dealing with the harsh black-and-white proof of rejection, and bouncing back, and trying again.

There were networking firsts: first time at a writing conference. That was a big one. I met my local critique group there, as well as other writers who I now call friends. If I hadn’t been willing to jump off that particular cliff and head to NYC all by myself, without knowing anyone, I’d have missed out on so much. “I can do this,” I told myself on the bus ride down, secretly terrified the entire time. “I’ve got this.” And I did.

2017 is going to be a year of Really Big Firsts for me. My first novel comes out on February 14th, and three days later I’ll be at Boskone 54 as a panel guest for the very first time. I pressed send on my Boskone application with shaking fingers: that was a pretty steep cliff to jump off, and I’m proud that I took that chance.

Writing means spending a lot of time in the solitude of your own thoughts. But it also means being willing to take risks and to leap – sometimes without any idea of where you’ll land. It’s scary, and wonderful, and spine tingling, and euphoric, all at the same time. But it’s worth it. It’s worth every second of that free-falling drop. What are you waiting for? Just jump. It’s time to start your own list of firsts.

Ju's book can be found at: http://hyperurl.co/9ufdbj

And huge good luck with the launch! 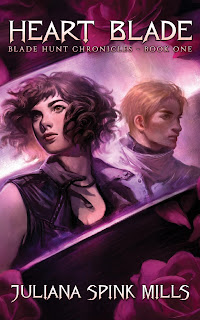