May 17, 2016
This blog has had many sources that came together in my mind today, in one of those light-bulb moments.


A few weeks ago, I was on an online forum for writers and two members took a differing opinion on a subject - as you do on forums. It got into quite a tit-for-tat, culminating in one of the writers indicating that until the other had as many sales, they weren't best placed to comment.

I was pretty astounded. I put up my own post, asking if I was unusual for not judging the validity of a writer based on their sales, and the replies that came back were interesting: sales were seen, by many but not all respondents, as a parameter by which a writer should be judged.

That depressed me. Not in case I'm less well judged than other writers - I don't expect to be deemed any better or worse than others, because so much is down to personal preference - but because of the way this industry works.

An example from my own backstory, if you will (I tend to use my own history in the blog because I'm not going to sue myself, not because I'm a raving meglomaniac). One of my books was taken by a great agent and repped at a bad time for the genre, and didn't sell. But it was close. If that book had been released by a top genre imprint, rather than self published, and had the additional sales that would have come from bookstore distribution and some marketing money, would it have had more merit? Did that combination of turns of the die make my value as a writer go down? It seems it did. And yet it makes no sense to me. I still worked with great editors, I still honed it into a book that's been popular with those who have read it. It's still, essentially, the same book (I'd argue it's a rather better book, as it happens.) 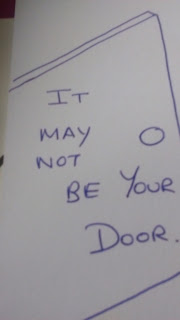 Now, I'm a management consultant. I have enough inspirational quotes up my sleeve, for those meetings where you need to inspire and it's been a long day, to keep myself in business for years. I'm pretty immune to quick sayings that change my outlook.

Until I saw this one:
'If a door won't open, it may not be your door.'

Wow, said I. I stared at it, and it started to occur to me that I'm insistently trying to open a door into what I consider my perfect future - writing full time. The great dream of all writers, to get rid of all the stuff that disrupts what we love doing.

Yet, I'm happy with where I am in my professional life. I have a consultancy I worked for years to build, which brings in consistent income, in a field where I'm a specialist, respected, and have many colleagues I'm lucky enough to consider as friends.

Another, related, throwaway comment that fed into this came when I was musing on the crowdfunding model. Why would I commit the time to that, with no guarantee of income (and a model I'm not comfortable in, having others support me) when I had a job that could, and does, fund my writing, asked a respondent.
With that, a new door opened, one that isn't reliant on sales and huge success. One that allows me to write my own stuff, in my own way, without feeling I have to find the market or fail because my family's basic needs are reliant on me making money from writing (and, believe me, that's a good thing. I've just done last year's accounts....). One that puts success at its soul.

Move forwards to today and a conversation I'm having with some online writing friends, about how we - writers - tend to put ourselves down. If we don't sell a story, it lacks merit. If we don't find an agent, we've failed. If we're daunted by editing notes, we're not the writer we should be. If our agent doesn't sell a book, it's not worthy.

It's a self-perpetuating circle and a truly miserable state of existence. To always compare yourself to someone else.

Selling books is a fickle business. No one can predict what will take off, and what will stay niche. If you write to a market, you might become formulaic and sales will be lacklustre. If you write something quirkier you might not find a market with it, and sales will be lacklustre. If your publisher puts a cack cover on it, your sales might be lacklustre (a case in point - Lois McMaster Bujold is still not published in the UK because on the first UK book sales weren't great. Many people blame a weak cover for part of that.)


Because of that, I've tried to change my mindset over the past weeks, and I'm happier for it.

Here, then, is what I'm putting my value base on:

Did I write the book I wanted to write? Am I proud of it?

(Yes I did, and yes I am. I took on ambitious themes - and they don't get much more ambitious than the sort of character themes tackled in Abendau - and did the best I could with them.)

I read yesterday about a multiple award-winning author, who stated she wasn't proud of her first four books. That made me sad. Sure, an author might want to change things within those first books, or they might see where their craft could be improved. But not to be proud of having the germ of an idea, completing it, bringing it out and having the sheer tenacity it takes to get a first book published? That's a soul destroying thing.


If you've done everything you can to make that book the best it is, at the time you wrote it, if you worked at it, if you can say, hand on heart, that is something I want my name on, you've done it. You're a writer. Be proud. Don't be apologetic, or downbeaten because someone else seems to be doing better than you that day - someone always will.

Be proud of what you've achieved today, and yesterday, and in the future. From there, lies value.

NWA said…
I was involved in that discussion Jo mentions at the beginning of her article. There was an argument about characterization and another person (who doesn't write, different discussion) claimed I was making an argument from authority fallacy, basically accusing me of not knowing what I was talking about.

So I threw down the gauntlet and asked how many books that person had sold. If he had established himself as a known writer with a great handle on the craft, then he could claim I didn't have the authority to speak on what makes good characters. The other person retreated from the conversation after the challenge.

I write full time and make a good living at it. Readers like my stories and I have a pretty decent grasp of character, plot, etc. If I didn't, I wouldn't have the endorsement of the free market. Some people don't care for Michael Bay movies, but they are entertaining enough to be very profitable, which is why he can make whatever movies he wants.

The other person claiming I don't have the authority to speak on character is like a bum trying to convince you he's got a better financial system than a self-made millionaire. Just doesn't pass the smell test.

Every author should set their own goals for their writing. Some just want to finish a story and get it out of their head. Some want awards, to land an agent, movie options, etc. Set your own bar, but at least set it high enough that it's a struggle to reach.

I want to keep writing full time and never return to a cubicle. That means I write entertaining stories where there's enough of a market to pay for the book's costs and pay other bills. Someone tells me I do't know what I'm doing and my eyebrow starts twitching.
17 May 2016 at 11:24

I think it's dangerous to dismiss others with less experience. That doesn't matter what the field you work in, because at the risk of using a cliche they often see the wood whereas you see the tiny branches.

When I was working on my first excavation there was what appeared to be an exciting earthwork (a possible building). I found it first but a third year student elbowed me out of the way determined to have the glory. The professors were all wetting themselves with excitement.

The farmer walked past and in a very thick Somerset accent he said: "I see you find the bedrock." Apparently it was an unusual pattern of very shallow bedrock. He didn't need a phd in archaeology to identify it ;).

When I was working in museum education I was presenting Pictish artefacts. Picts designed these carved balls but no one knows why they did. One of the kids pipes up: "My Dad's got something like that. He winds his rope round it." It's the best idea I've ever heard from anyone.

What I hate is when you read an article about JK Rowling, George RR Martin, Stephanie Meyer, EL James, Dan Brown etc and there are comments about how awful they are. Now they may not be my thing but can a writer that inspires the imagination of many people really be that bad? I don't think so. They have to have some aspects of the storytelling right. But then I joke about literary fiction losing the plot...
21 May 2016 at 09:43

If people are going to equate "qualified to talk about writing" with "lots of sales", I'll just throw this article into the mix:

Because I like to do the equivalent of ringing the doorbell and running away. :-)

And one should always remember that however good one is (or one thinks one is!), there's always somebody better. And it might just be the person one is currently dismissing.

Plus, I do a technical job that requires specialist knowledge. Every so often, some non-specialist comes along and says, "Yeah, but what about...?" And I think, "I never thought of it that way." Usually that's because the non-specialist has got completely the wrong end of the stick, but not always. Sometimes, they do have a point, and I have to go away and do some serious thinking.

Unknown said…
All great points, Theophrenia. Also, we don't know what will be successful in the future. So many writers didn't do great with their first books and then do great with something later. A writer friend of mine calls it the breakthrough book - and some have it happen early, and some later (and some never at all, of course).
16 December 2016 at 04:50